Did I read that right? Meta lost 40% of its market cap already?

What does Akamai buying Linode mean to Linode subscribers? Hmmm…

Yes, you can turn off Firefox’s telemetry, but not sure if it turns off all, including the future IPA work with Meta. LIbreWolf is based on Firefox, only more privacy-oriented (and open source).

I brewed extra strong coffee this late in the afternoon and got tempted to have a cup. Tsk tsk. It is for making coffee ice cube for tomorrow. Hmmm #coffee

A few days ago, I discovered another iOS, iPadOS and MacOS gem - Play, an application to save your YouTube video URLs in. It is a convenient way to manage your YouTube video library without logging on YouTube and giving more data points to Google. Play allows you to organize your video collection using tags, and with iCloud sync support, this gets propagated to all devices. Note that Play does not download the videos, it organizes the URLs of your favorite YouTube videos.

YouTube is one of the Alphabet products that I couldn’t find a replacement or alternative to. It is not about replacing the technology, but replacing the content - if only the content on YouTube is available on PeerTube.org instances. Anyway, to access YouTube videos without giving too much data to Alphabet, I use Yewtu.be when I want to watch it right away, but otherwise, I’d download it using yt-dlp or youtube-dl for later viewing on the Apple TV via Plex. And to make it simpler, I wrote three different shortcuts to automate my workflow: [1] send the YouTube URL to my Raspberry Pi for downloading, [2] Add YouTube URL to Reminders app for later downloading (usually when I am away from my home network) and [3] Process each YouTube URL in the Reminders app and call the first shortcut to download it (when I am on my home network). Why Reminders app? Well, at that time, it is the best way to write, read and delete items using shortcuts that is available on iOS, iPadOS and MacOS.

I thank Marcos Tanaka for making this application and for quickly responding to queries on Twitter. I found a ShareSheet bug when using DuckDuckGo browser, and also Yewtu.be links are not being recognized, and I hope they get resolved soon.

Play is available on the iOS App Store and Mac App Store for PhP99.00/US$1.99, and you can share it via Family Sharing, too! So what are you waiting for? :)

Mozilla saying that “advertising provides critical support for the web” is true, but advertising is good IF THERE IS NO TRACKING ACROSS THE INTERNET. Sorry, Mozilla - your IPA (partnering with Meta whilst accepting funding from Google?) will keep this data tracking alive. That is it for me. I do not trust you anymore.

I cannot wait for the DuckDuckGo desktop browser.

Help! Need to replace Firefox on MacOS, and Linux! Where is the @DuckDuckGo desktop browser? #DitchFirefox

Why is Google mum about the issue that is BT trackers? Why won’t they pick up that AirTag detection code, add it to AOSP and push it to all? Anyway, there are far worse trackers readibly available in the market today (see Amazon).

Read how Kashmir Hill tracked her partner, with his consent, of course.

Wow! Qualcomm still needs to do a lot of work to catch-up. iPhone 13 Pro Max is still a speed monster

Preparing to search for an image to use as wallpaper In a span of three (3) days, two awesome developers just made my iOS workflow simpler. One is Play and the other is @vincode’s Humboldt. Thanks much!

Microsoft is green with envy - they missed mobile and the corresponding app stores, and since they were not successful on those fronts, they throw everything they got against those who’re successful. So typical, patented Microsoft behaviour. LOL

An annual celebration marked by events that educate and inform young ones and young once on how to be safe on the internet. On the main website, Safer Internet Day, you will see that it is supported by the likes of Facebook, Google, Tiktok and Twitter, four of the largest online services where users are not safe.

Events promoting Safer Internet Day (SID) often concentrate on online bullying, specially on these platforms. It is like a tobacco company sponsoring a healthy smoking habit to children! It is rare to have an event where organizers tell participants to stop using these companies' products and services for fear of losing sponsorship money.

So how can you be safe on the internet when the narrative is controlled by companies that make the internet unsafe, right?

How to be safe on the internet?

I doubt that you will hear most of these from any of the Safer Internet Day events or they will lose their sponsorship deals!

Be safe out there.

Who knows what this delicacy is called?! 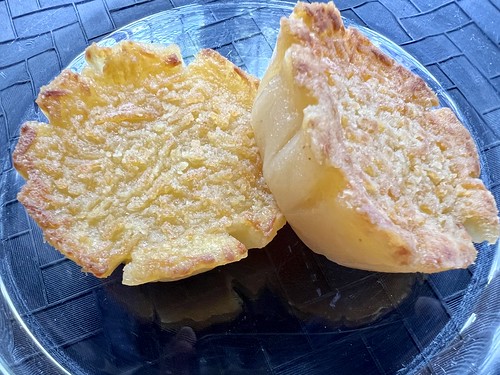 Found this at the local Starbucks branch 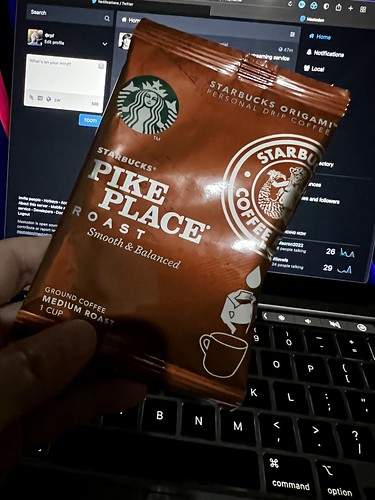 Meta/Facebook (FB) just lost US$200B in value right after reporting that they will be facing a loss of US$10B this year due to Apple’s App Tracking Transparency (ATT), which asks users if they would allow applications to track them. In addition to this FB just lost around half a million daily users globally in the last quarter of 2021 – when the world is still spending most of the time online. The writing is on the wall, FB is going the Friendster route, and before it is too late, users must look for a better, more privacy-friendly platform.

Globe and Smart, the two largest Philippine mobile operators, don’t make this easy for Filipinos because they provide free access to a subset of Facebook. However, that free access is not always free, as I have written about before. The question is - are Smart and Globe informing users when they are being charged for accessing parts of Facebook that are not free, Facebook definitely is not, according to the report? This is something that does not show up in the radar of the Philippine Senate and House because they are probably clueless about these things.

In addition to this, both Smart and Globe are openly exhibiting anti-competitive behavior when they offer deals such as Smart’s GigaStories and GigaStories+ and Globe’s GoShare plans, which provide special and preferential access to Facebook, Instagram, TikTok, Twitter, and Kumu (and with the case of GoShare, it adds Snapchat to the mix). There are other packages offered by these two that are anti-competitive. It makes it difficult for other online services and free, open source software based equivalents to compete. Imagine, how can the likes of Mastodon.social, PixelFed.org, WeMe.com, Flickr.com, and PeerTube.org, to name a few. How can these online services gain traction when Smart and Globe are making it expensive for potential users to access as compared to their preferred Facebook, Instagram, Tiktok, etc.? Why isn’t the Philippine Competition Commission even taking a look at this and start requiring Philippine telcos to exercise net neutrality?

If (and that is a BIG IF) the Philippine Congress starts going after the likes of Facebook for its surveillance business and the free-not-really-free false advertising, and the Philippine Competition Commission starts investigating Smart and Globe’s anti-competitive behaviors, then Facebook’s journey to Friendster will be faster. UNFORTUNATELY, the chance of a crow turning white (pag itim ng uwak) is higher than either of these two happening.

For Facebook, the writing is on the wall. There is a generation of Filipinos that is quick to follow their western counterparts, who have mostly ditched Facebook, leaving Facebook mostly used by grandparents (Lolos and Lolas) and aunt and uncles (Titas and TItos), in other words, the grown-ups (gurangs). Yes, Facebook is no longer cool! Time to save yourself and dicth Facebook now.

German and French ministers downplayed Meta/FB’s threat to leave Europe. I’d say, Meta remove Facebook and Instagram off of Europe please, so the rest of world will find out how useless your platforms are.

France and Germany not scared of Meta threat